The refurbished GE Logiq E9 with XDclear 2.0 is GE’s second revision of the popular Logiq E9 premium general purpose radiology ultrasound machines. Among the more popular radiology machines, the Logiq E9 2.0 presents among the best value and cutting-edge technology in ultrasounds today. As a premium shared service ultrasound machine, the GE Logiq E9 2.0 price can vary greatly due to its various configurations. In particular, later models that include XDClear technology will be more costly, yet still very reasonable in price.

The GE Logiq E9 2.0 and its previous version, GE Logiq E9, are similar systems with each featuring its single crystal probe technology that provides outstanding image resolution. XDClear technology provides compatibility with single-crystal probes, which has a dramatic and powerful impact on image resolution. The GE Logiq E9 with XDclear 2.0 adds the transducers C2-7-D, C2-7VN-D, C3-10-D, and L3-9i-D that are improved versions of previous transducers on the Logiq E9.

As with other systems in the GE Logiq series, these are designed to be full shared service systems. The Logiq series incorporate technologies from GE’s Voluson series (women’s health) and its Vivid series (cardiovascular).

The Logiq E9 2.0 with XDclear features excellent image quality, particularly with its single crystal XDclear transducers. These provide a step above traditional transducer technology, improving on spatial and temporal resolution. It can also serve as a shared service ultrasound with 4D obstetrics, allowing it to be a top performer and workhorse in nearly any environment. Users are most impressed with its resolution and penetration, allowing for better diagnosis in difficult-to-image patients. Shear Wave and Strain elastography are available as options and found on many systems. Two versions of monitors are available as well, with the 22″ OLED display carrying a higher resolution over its standard 19″ high resolution LED display. Its 10.4″ touchscreen display has an intuitive design and provides a good workflow.

This shared service system remains among the top ultrasounds on the market and should strongly be considered for those looking for a premium ultrasound at a reasonable price.

The GE Logiq E9 was replaced by the GE Logiq E10, which at the time of this writing, is arguably the best refurbished ultrasounds we’ve tested. That being said, the availability of the E10 on the refurbished market has made the Logiq E9 2.0 among the best deals on the ultrasound market. 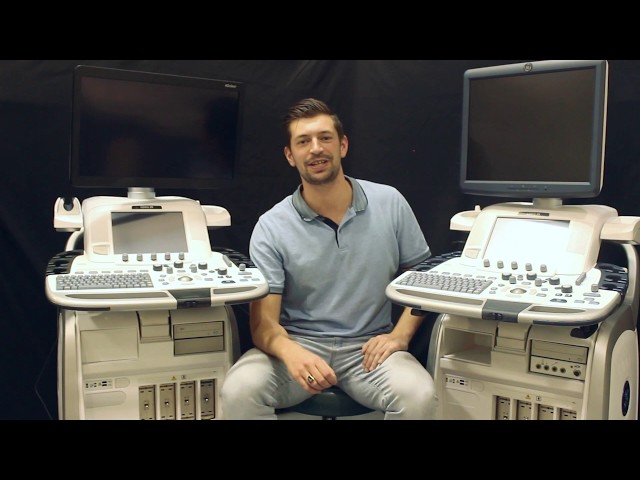 The ScanAssistant on the GE Logiq e9 2.0 essentially automates much of the scanning process, allowing the sonographer to focus on the patient and getting the proper image. The ultrasound machine will automate everything from annotations to measurements.

A button on the machine that moves the keyboard/console up and down electronically.

GPS Needle Tracking is an advanced option that uses a special adapter to track a needle tip and provide more accurate imaging and placement.

CrossXBeam on the GE Logiq e9 2.0 is also known as compound imaging. It allows the ultrasound transducer to see from multiple lines of site at different angles, as opposed to the standard line-of-site that’s perpendicular to the transducer lens.

Very little. This is similar to asking what the difference is between a picture and a video. 3D is a single image, while 4D is a live, moving picture version of the 3D image. In 4D obstetric situations, you would be able to see the baby move, smile, yawn, stretch, etc.

Speckle Reduction Imaging is GE’s terminology for a certain type of imaging optimization. Speckle Reduction Imaging (SRI) allows the ultrasound to better define tissue and artifact, which creates a smoother, clearer image without creating a harsh, heavy contrast image. It’s a common feature among most modern ultrasounds and is one of the best imaging technologies in recent history.

You can find the GE Logiq e9 2.0 brochure below. Probo Medical has a large inventory of owner’s manuals and brochures, contact us today for more information.